The Future of Investigative Journalism

The EU is nearing an impasse that risks jeopardizing the future of investigative journalism.

Sweden is looking on, saying nothing, in the belief that the new regulations proposed by the EU will not impose any direct limitations on Sweden, specifically.

It is a naive assumption. If the proposal is adopted, it will affect the ability of Swedish journalistsand media companies to pursue free and investigative journalism in equal measure.

The issue at hand is a new EU Directive intended to protect trade secrets. Negotiations concerning the directive are currently ongoing among the European Commission, the European Council and the European Parliament, and a decision is expected in the coming weeks.

While the directive is intended to prevent industrial espionage and unfair competition, the proposal currently on the table has much wider ramifications. It also includes provisions that would limit opportunities to conduct investigative journalism and that restrict the general public’s right to information.

Consequently, it is not fitting for Sweden, in the belief that we can maintain our strong protection of journalistic freedoms despite the directive, to look on passively as the proposed directive is ushered into law.

The difficulties arising from the proposed directive are the following:

• There is a manifest risk that the directive will affect the international cooperation enjoyed by journalists and media companies in connection with investigations and exposés.

• It breathes new life into the problem of libel tourism, which entails the risk of Swedish media companies being drawn into lawsuits in other EU countries and thus being held accountable under foreign legislation.

• Naturally, it is dubious for Sweden, within the framework of European cooperation, to support regulations that make it possible to restrict journalistic freedoms in other countries.

Investigative journalism is about conducting independent investigations into suspected impropriety and publishing information that would not otherwise have been publicly disclosed. It is not uncommon for this work to involve information that a party or parties has an interest in keeping secret. It is quite natural for investigative journalists to read reams of documents as part of their research.

Thus, acquiring, possessing, and scrutinizing documents is an integral part of investigative reporting. Publishing information about suspected irregularities is part of the journalistic mandate. What’s more, the general public has the right to partake of such information.

This fact is wholly undisputed.

According to the proposal, it is not just the prospective publication of material that may be considered illegal, but also the acquisition, or even the mere possession of material in itself. As it has been framed in the text of the directive, individuals must in a “legitimate way exercise the right to freedom of expression and freedom of information,” in order to be exempted from prosecution on the basis of the directive.

This creates legal uncertainty and risks leading to self-censorship among reporters, since both individual journalists and media organizations risk incurring heavy fines and liability for damages that “correspond to the actual injury”.

As stated in a council memorandum, Sweden’s parliament and national government believe that Sweden can maintain its stringent protection of journalistic freedoms in spite of the directive.

To passively consent to an undermining of the foundation of investigative journalism across the EU is to do just the opposite, and we cannot accept it.

Like society in general, journalism is becoming increasingly international. In Sweden, a number of major exposés in recent times have come about as a result of cross-border cooperation among media companies, individual journalists and sources. Any irregularities in Swedish companies’ operations abroad must be open to public scrutiny, as should foreign companies of interest to the Swedish public.

This ability to investigate inappropriate actions is very important to public debate and we now, in this instance, have an opportunity to safeguard it. Accordingly, we issue the following admonition to Sweden’s national government and parliament and to EU parliamentarians: Act now, before it is too late!

The directive must clearly and expressly exclude journalists and journalism from its provisions in order to protect freedom of the press and to safeguard free and critical journalism.

As long as such guarantees are lacking, the directive must be rejected. 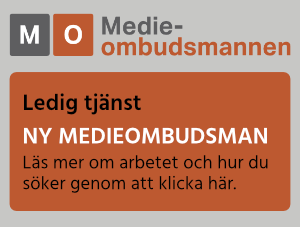